Who will you see at Royal Portrush?

One of the many things that makes The Open so special is that it is perhaps the only stage where old meets new.

Golf’s most international tournament brings in players from across the world and there they mix with some of the greats who have previously held the illustrious title of Champion Golfer of the Year.

The exemption list is always a fascinating one to follow throughout the season as players continue to book their place at golf’s oldest major.

But we already know some of those on their way to Royal Portrush, with all Champion Golfers under 60 automatically exempt.

For some, it provides another opportunity to win the coveted Claret Jug, while for others it’s another chance to play in the game’s biggest tournament.

There are 21 Champion Golfers exempt and here are some of the names you can expect to see:

Where better to start than with the oldest man in the field. Tom Lehman knows all about teeing it up on the best links courses around and is preparing for his 24th Open appearance.

The American lifted the Claret Jug at Royal Lytham & St Annes in 1996 by just two strokes from Ernie Els and Mark McCumber but, as he turns 60 in March, this could be his final hurrah.

Lehman last made the cut in 2013 at Muirfield, where he finished T58th, while he has made just two top-20 finishes since that his sole major win.

A T4th finish was secured at St Andrews in 2000 while he rolled back the years in style at Royal St George’s with a T14th finish in 2011.

A former world number one, a title he held for one week in April 1997, Lehman has ten top-six finishes in majors and three Ryder Cup caps – while he has twice been assistant captain.

Lehman is the only Champion Golfer who turns 60 this year but a player close behind him is compatriot Mark Calcavecchia.

The 58-year-old is the only exempt player who became Champion Golfer of the Year in the 1980s, with his 1989 success at Royal Troon the undoubted highlight of an impressive career.

In one of the most dramatic Opens of all time, Calcavecchia trailed third-round leader Wayne Grady by three strokes before firing a 68 to force a play-off with Grady and the charging Greg Norman – who hit a 64.

However, Calcavecchia outlasted them and won the four-hole play-off by three strokes to lift his maiden major. Incredibly, he almost pulled out on the eve of The Open because his wife was expecting.

Portrush natives will of course be cheering on a home winner and there are two Northern Irish Champion Golfers in the field.

Rory McIlroy is the only European golfer with three of the four majors to his name and became Champion Golfer of the Year in 2014 with a two-stroke win at Hoylake.

A consistent threat, his last four finishes in the Championship reads: 1, T5, T4, T2 – while in 2010 he equalled the then major record with a round of 63 en route to a third-place finish at St Andrews.

McIlroy will certainly have his supporters but Darren Clarke is Portrush’s favourite son. Although born in Dungannon, Royal Portrush is Clarke’s home course and the 2011 Champion Golfer can’t wait to tee up. 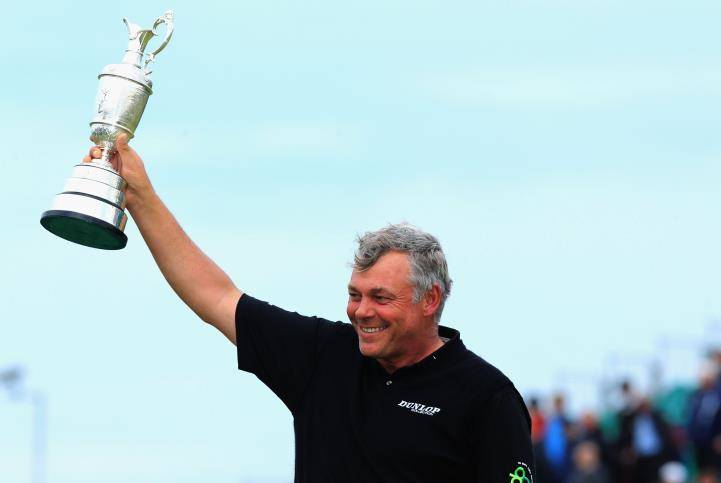 Clarke’s win at Royal St George’s capped off a remarkable few years for Northern Ireland golfers, following Graeme McDowell’s win at the 2010 US Open and McIlroy’s maiden major success at the same event a year later.

But if it’s consistency you are after then look no further then Ernie Els, who is all set to play in his 29th Open. The South African has recorded an incredible 35 top-ten finishes in majors – including 13 at The Open – and became Champion Golfer in both 2002 and 2012.

His compatriot Louis Oosthuizen will also be among the contenders, looking to add a second Claret Jug to his mantel piece. The 36-year-old ran away with it at St Andrews in 2010, winning by seven strokes, and only Tiger Woods has bettered that since 1913.

Woods set Carnoustie alight last year with a weekend charge on his first Open appearance since 2015 and will return to Royal Portrush back at the top of his game.

The only three-time Champion Golfer in the field, Woods has clawed his way up to 13th in the world rankings after being out of the top 1,000 in late 2017.

Another man in the midst of a renaissance is 2009 Champion Golfer Stewart Cink, who will be celebrating the tenth anniversary since his play-off win over five-time Champion Golfer Tom Watson at Turnberry.

Cink secured his first major top-ten finish since his Open success at the PGA Championship last August and has qualified to play at The Masters for the first time since 2014.