The legend of Ben Hogan was already secure by the time The Open of 1953 rolled around – the eight Major titles won both before and after a horrific car accident that left him virtually pronounced dead in 1949 made sure of that.

But the way he crossed the pond to compete on British soil for the first time, and left with the Claret Jug in tow, was the icing on the cake of an incredible career.

The all-conquering American had already claimed the Masters and US Open titles in 1953, yet Carnoustie and The 82nd Open that July – Hogan’s first and last Open – was a different challenge altogether.

Hogan may have been arguably the greatest golfer of all-time, in the form of his life, but as he prepared to compete on unfamiliar fairways, under slightly different rules – the 40-year-old wasn’t leaving anything to chance.

In typically diligent fashion, he arrived in the UK a week early – not just to familiarise himself with the course but to practise with the smaller, 1.62in golf ball which he had not used before.

The centre-shafted putter that Hogan preferred was now legal under R&A rules but Carnoustie, with its burned-out fairways and slower greens, was a different beast to the perfectly-manicured venues in the USA and the story goes that he offered to buy the greenkeeper a lawnmower upon first seeing the course.

Regardless, the Texan breezed through two rounds of qualifying – a gallery of over 2,300 turning up for the second day, forcing the R&A to introduce hand-held ropes for the first time – and even his fellow pros were enraptured by his mystique.

“He was a total mystery,” remembers Peter Alliss, who would go on to finish ninth at The Open. “He was from another planet.

“We were all in awe of him. He was like royalty – people would approach him deferentially.”

When his car collided with a Greyhound bus in 1949, Hogan was so badly injured that he had to learn how to walk again – his recovery and return to golf becoming the basis of the film Follow the Sun, starring Glenn Ford.

That propensity for making a comeback would serve him well in Angus, as struggles with his putter saw him post an opening-round 73 – tied for seventh, three shots behind fellow American, amateur Frank Stranahan.

Hogan continued to struggle on the greens in round two but a score of 71 moved him to a tie for fourth, on even par, as Scotland’s Eric Brown and Wales’ Dai Rees led the way on two-under, with Roberto De Vicenzo of Argentina one stroke behind.

In addition to the support of the locals, Hogan also had some famous fans in attendance as Frank Sinatra, who was performing at a concert in Dundee, was in the gallery for day two and told the media that “all America is rooting for Hogan."

In the third round, the eight-time major winner made his move – joining De Vicenzo atop the leaderboard after birdieing the 18th to card a 70. 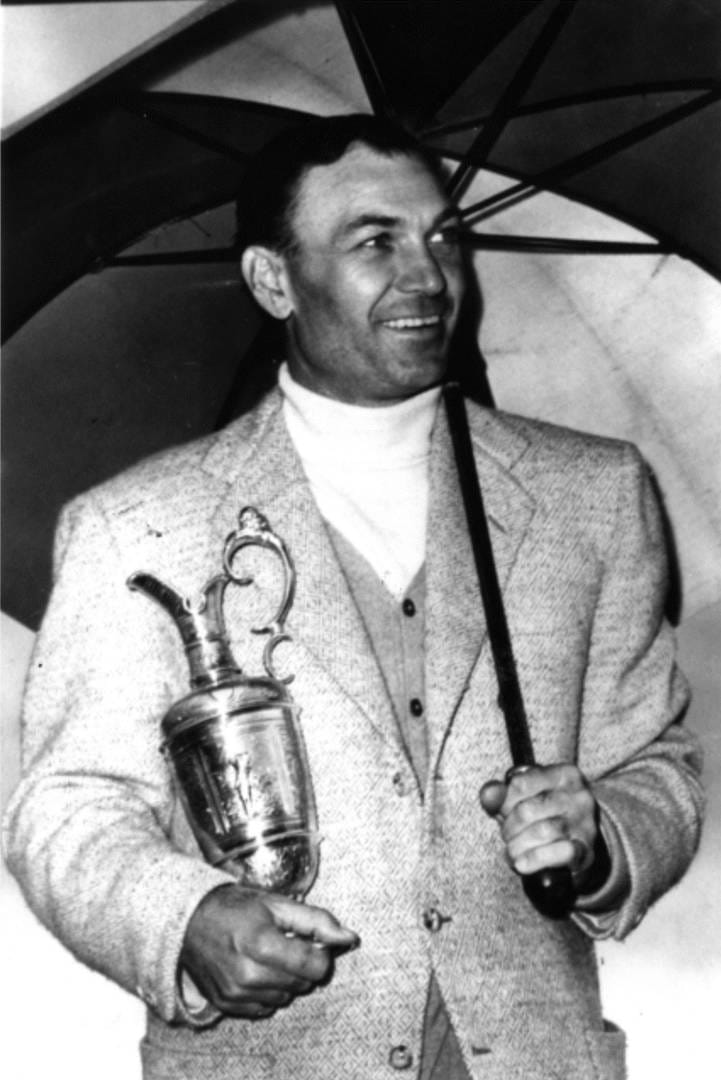 Battling chills, flu and old injuries from his car accident four years prior, Hogan later admitted he was desperate to avoid a 36-hole play-off. And he did – in style.

A remarkable birdie at the fifth changed the trajectory of his final round as he found himself deeply bunkered with a bad angle but chipped in from 30 feet.

He then birdied the par-five sixth by driving down the narrow alley of fairway between the bunkers and out of bounds on the left; a strip of land since known as Hogan’s Alley.

The Champion Golfer to-be then opened up a two-shot lead by the 13th, saved par at 17 and finished off a course-record round of 68 – bettering the mark set by Antonio Cerda in the third round earlier that morning – with a final birdie at 18.

His total of 282, six-under for the Championship, was four shots clear of the field as Cerda, Rees, Stranahan and Australia’s Peter Thomson had to settle for second.

Unsurprisingly, the only question the people of Carnoustie wanted to know of the newly-crowned Champion Golfer of the Year was whether he would return.

“I don't know when I'll be back,” admitted Hogan at the prize-giving. “But I'll try to make it next year.”

The American never did come back to The Open, while the triumph – making him the first man until Tiger Woods in 2000 to win three majors in a year – would be his ninth and last Major championship victory.