Collin Morikawa is the Champion Golfer of the Year after he produced a stunning final-day charge to win The 149th Open at Royal St George’s.

The American beat Jordan Spieth by two shots in the Sandwich sunshine after a flawless round of 66 to take home the Claret Jug on his Open debut.

Morikawa started the day one shot back from overnight leader Louis Oosthuizen but three consecutive birdies on the front nine propelled him into a four-shot lead at the turn. 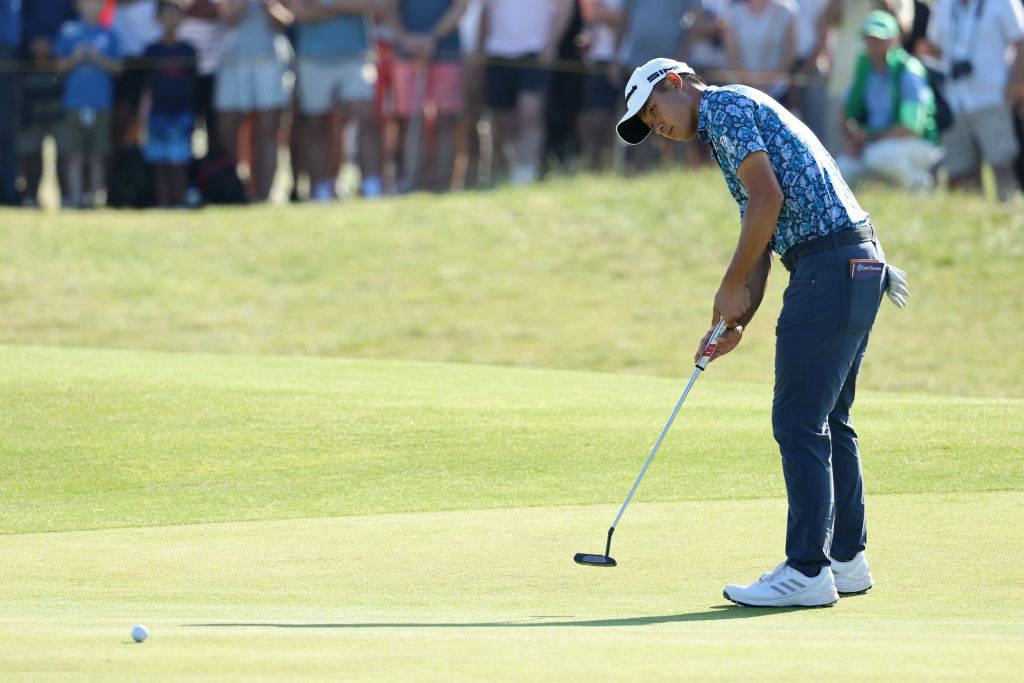 Spieth, Oosthuizen and Jon Rahm all applied pressure on the back nine but Morikawa showed plenty of heart to see it through.

The 24-year-old also set a new record for the lowest score at Royal St George’s, his 265 strokes beating Greg Norman’s 1993 effort by two.

2010 Champion Oosthuizen dropped two shots on the front nine and, despite an improved second half to his round, he could not recover and his wait for a second major title goes on.

In the Garden of England, Morikawa grew as the week progressed and when it came down the final flourish, he bloomed.

Playing in the final pairing at The Open is not for the faint-hearted and Morikawa made an understandably slow start on Saturday. But on Championship Sunday, there was no sign of nerves.

Confident from the fairway, he landed gorgeous approach shots at both 1 and 2 but failed to convert either into birdies. It was a clear warning.

At a course as imposing as Royal St George’s, there are always sticky moments but Morikawa seemed unperturbed. He scrambled pars at 3 and 4 and stood on the 5th tee in a tie for the lead with Oosthuizen after the overnight leader dropped a shot.

The South African was clearly struggling, his swing a little tense, his mouth perhaps a little dry. Morikawa could sense it was the time to strike – and he did so ruthlessly.

While Oosthuizen dropped another shot at the par-5 7th, Morikawa made birdie to take a two-shot lead and he extended that to three at the 8th after a sublime second shot that bounced on the front of the green and fed down towards the hole.

Then, really turning the screw, he landed another birdie on the 9th. Three holes, three almighty blows that proved decisive.

At the turn, Morikawa was on -14 and momentarily his lead was as big as four shots. But, in a sign of the immense quality on display across the golf course, that had been reduced to just one by the time he reached the 14th - all without the American dropping a single shot.

With Spieth chasing, Rahm charging and Oosthuizen re-awakening, Morikawa could surely sense the net closing in. But he responded like a Champion, sinking a decisive birdie on 14.

He then scrambled a par at 15 after an errant approach shot flew over of the back of the green, his par putt from 10 feet met with a clenched fist-pump. For a player who does not show much emotion on the course, the reaction to that putt was telling.

Ahead, neither Spieth or Rahm could land a telling blow and Morikawa maintained a two-shot lead for the final three holes. He delivered three danger-free pars to clinch victory and become the first male golfer to win two majors on debut – backing up his 2020 PGA Championship success.

“This is by far one of the best moments of my life,” he said.

When Spieth left Royal Birkdale with the Claret Jug in his back-pocket in 2017, it seemed a case of when – not if – he would win become Champion Golfer of the Year once more.

The brilliance that carried him to that thrilling win was put on ice during a fallow three years, but his re-emergence as a major force was confirmed on the Sandwich links.

After six holes, Spieth’s charge looked done. He missed a 10-foot par putt on 4 and then another on 6 to drop to -7, four strokes off the lead.

But what followed was simply sublime.

An eagle on 7 kick-started his day and a peach of an approach shot into the par-4 9th set up an eight-foot putt that he drained with ease. Another birdie followed at 11 and then back-to-backs at 13 and 14 closed the gap to just one stroke.

But with Morikawa not flinching, Spieth needed to pick up at least one more stroke to truly make his rival wobble. He could only par the last four holes but leaves the Kent coast having proved he is truly back to his best.

Oosthuizen is another who will cast his mind ahead after a turbulent final round. The South African finished second at both the PGA Championship in May and U.S. Open in June but he is playing some of the best golf of his life and will surely contend again.

Unlike days one, two and three, Oosthuizen’s swing was not quite so pure. His irons too often missed greens and he was made to pay with a bogey at 4, while another dropped shot at 7 was difficult to swallow.

Oosthuizen launched a perfect drive down the fairway but his approach shot found a bunker to the left of the green. These bunkers are not to be messed with and Oosthuizen fell foul, his attempt at a sand-save flying across the green and landing in another bunker on the opposite side.

While Morikawa ensured the chasing pack had little chance of nipping in to take the Claret Jug, several players made a Sunday charge.

Jon Rahm was at the forefront, and he delivered a superb back nine to briefly move into contention.

The Spaniard, who will go back to the top of the world rankings on Monday, shot a 66, with an eagle on 7 and then four birdies in a row between 13 and 16 entertaining the crowds.

Dylan Frittelli claimed fifth on his own after a solid final-day 68 to finish on -9, while Canada’s Mackenzie Hughes was a stroke back alongside Brooks Koepka.

Koepka was at one point sizing up a new course record after a birdie at 6, eagle at 7 and more birdies at 9 and 12.

That moved him to -8 but he needed more than six straight pars coming in to apply serious scoreboard pressure. Still, his round of 65 was enough to lift him to T6.

Dustin Johnson (67) finished one shot further back alongside Robert MacIntyre (67), Daniel Berger (68) and Scottie Scheffler (71), while Shane Lowry put up a stiff defence of his title. A round of 69 good enough for -6 overall and T12.

Scotland’s MacIntyre comfortably finished as the leading British player thanks to an excellent 67 to go alongside Saturday’s 65.

Aaron Rai came slightly out of nowhere to finish on -4, while Ian Poulter, Matthew Fitzpatrick and Andy Sullivan all signed off at -3 and T26.

Matthias Schmid and Yuxin Lin went head-to-head for the Silver Medal – awarded to the leading amateur – and it was the former who won out.

Yuxin provided plenty of highlights, including a fine long putt for birdie at 8, but he compiled a +1 round of 71 to finish on +6 for the week and was unable to truly test Schmid in the end.

The German started his round on level-par and thrilled the crowd at the par-5 7th when he followed playing partner Lee Westwood by sinking an eagle putt.

He joined Morikawa at the trophy presentation – two fine winners at The 149th Open.