It has been another intriguing day on the Royal St George’s links, with some challenges building and others faltering on a typically dramatic Moving Day.

The tee positions have posed a challenge while the battle is on to be the top-placed Brit after Robert MacIntyre surged to -5 with a superb 65.

LOWRY: PRESSURE COULD YET TELL ON LEADERS

Reigning Champion Golfer Shane Lowry didn’t quite put the pressure he would have liked on the leaders, shooting 69 to take him to five under overall – not that he has completely given up hope of retaining the Claret Jug.

“The wind is dropping down like it did yesterday evening, and it is a beautiful evening out there,” he said.

“But who knows. At the end of the day it is The Open Championship and there is a lot of pressure out there and it is tough enough.

“I am not sure I can win from here but the way I am playing, I can shoot 6-under.

Pre-Championship favourite Jon Rahm retains hope of backing up his US Open triumph but he will need to get on a roll on Sunday, when he will start -7 after a 68 today.

“Because of the weather conditions it's easy to think it could have been a little bit better, but the pin locations were no joke,” he said. 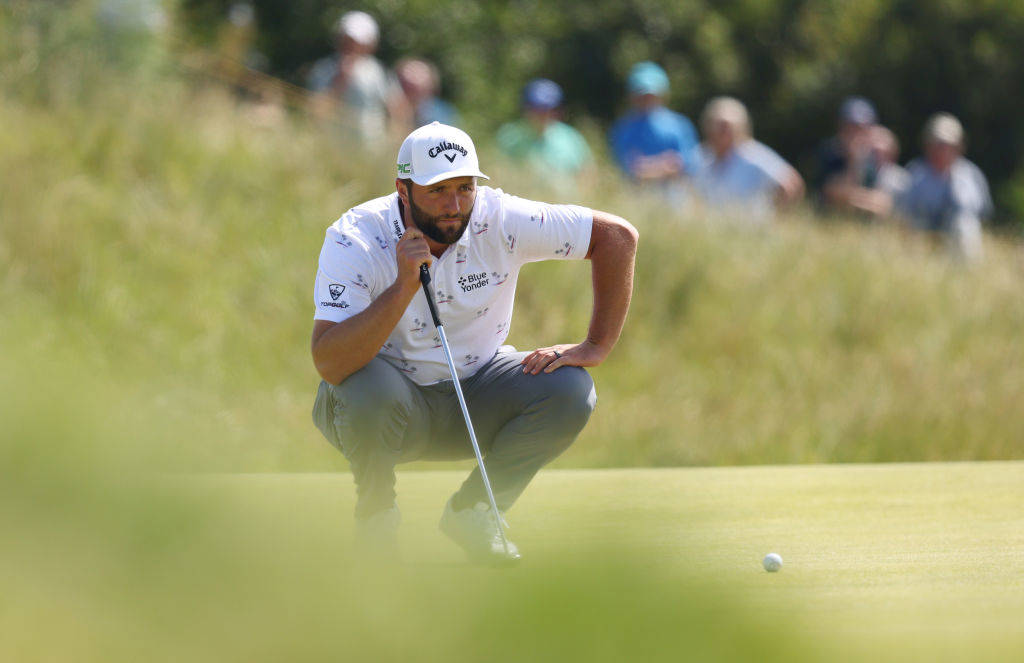 “I don't know if on TV you could appreciate it, but those are some of hardest pin locations collectively I've ever seen.

“Could have been one shot better and have a better shot tomorrow. Besides that, it was a pretty good round of golf.”

Corey Conners had a day to remember on Saturday, with his 66 putting him -8 and right in contention for a major win he hopes will be a matter of time.

“I feel ready,” he said. “I am going to be a little bit behind starting tomorrow, but I like where my game is at.

“I feel comfortable in this position. It's a lot of fun. The fans here have been great. Just enjoying the experience and having fun playing good golf.

“It has been fun to be in the mix at the majors. Hoping I can have a good day tomorrow and finish off a great week.” 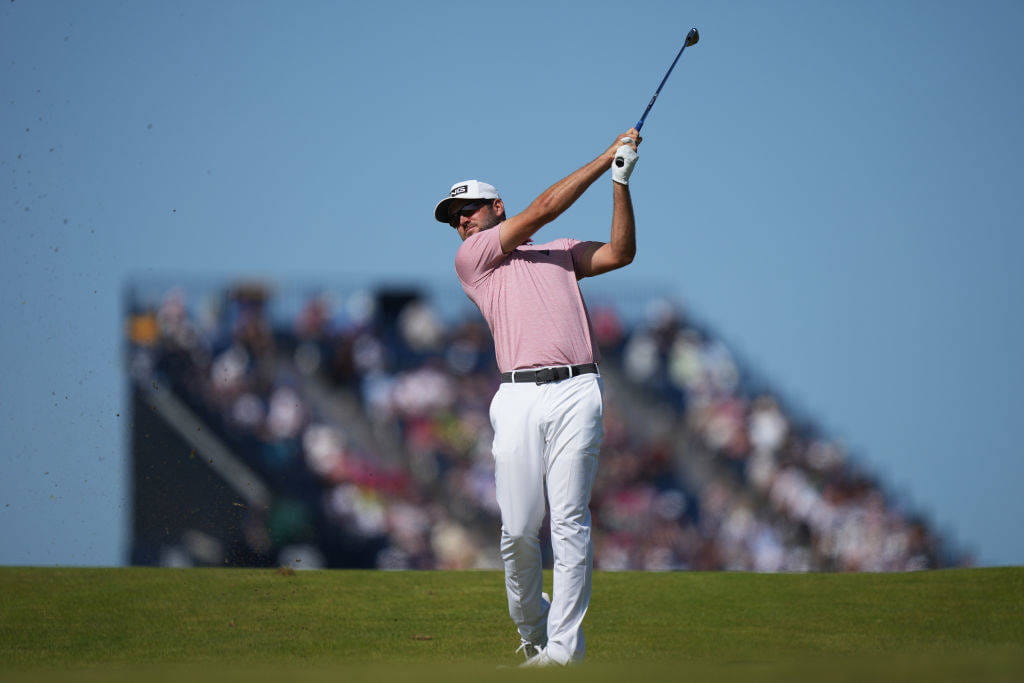 MACKENZIE IN THE MIX

Conners’ fellow countryman Mackenzie Hughes also kept his challenge alive and will start a shot behind his compatriot after his 2-under 68.

“I think a lot more of the same tomorrow and hopefully the putter heats up,” he said.

“I have the luxury of coming from behind tomorrow, which is maybe a bit of an easier position to play in.

“I will try and use that to my advantage and hopefully get off to a good start and get myself in the mix.”

Cameron Smith bookended his round with birdies – three bogeys and three birdies were sandwiched in between as he came in 2-under.

It will see him start tomorrow on -6 and though he knows it will be tough, he hopes to apply pressure at the top of the leaderboard.

“Yeah, it was really, really solid today,” he said. “Probably the best ball striking day of the week.

“It is going to take a big one tomorrow. Course is firming up nicely. Still not unplayable, birdies are still there, but it is going to have to be pretty perfect, I think.

“Louis [Oosthuizen] and Jordan [Spieth] at the top of the leaderboard, two great competitors that will be tough to catch.”

Arguably the highlight of day two was Jonathan ‘Jigger’ Thomson’s fairytale hole-in-one at the 16th.

Playing alongside Lee Westwood today, a round of 73 dropped the 6ft 9in giant back to +1 overall and he admitted the reaction to yesterday’s exploits affected his preparations – not that he would swap that moment for anything, of course.

“To tell you the truth, it [my phone] nearly broke last night,” he said. “It was just absolutely mental.

“To be honest, the whole thing was awesome, exciting. I tried to put it in a box, but it was tough last night to do that.

“I think that should have calmed down now, and get some good rest this afternoon and go again tomorrow.

“I played a lot better than my score today, to be honest. It was tough out there. I just could not get any momentum whatsoever.”

Thomson’s fellow South Yorkshireman, Matt Fitzpatrick, had his best round of the week so far on day three, signing for a 67 having sat at level par going into the weekend.

He now has his sights set on beating his best finish at The Open, which is currently the T20 he managed at Royal Portrush two years ago. 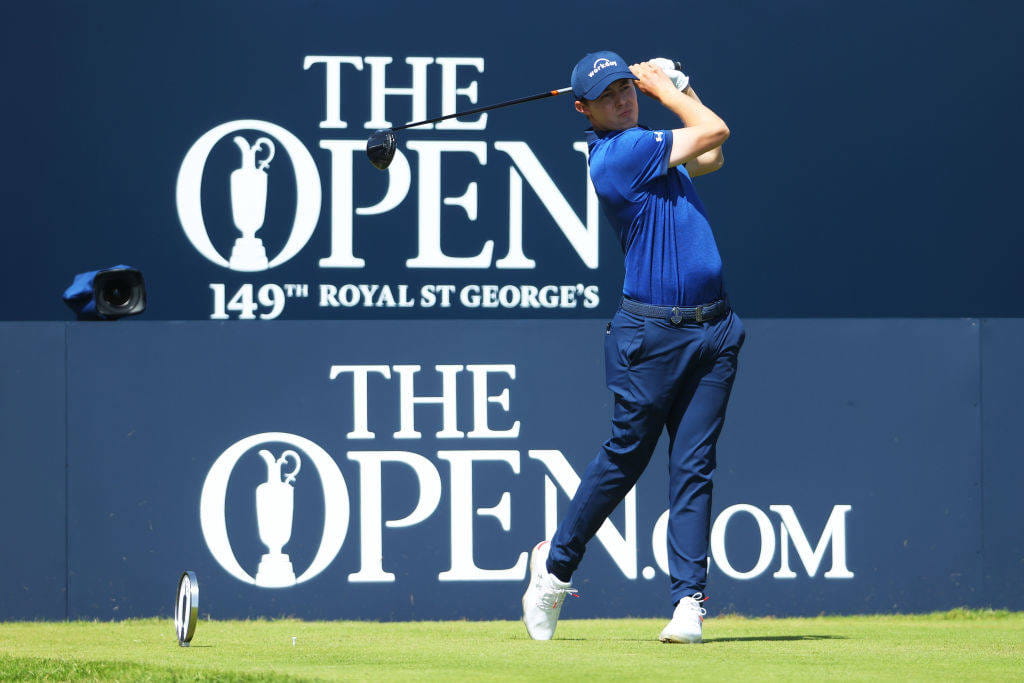 “To shoot 3-under was positive for me, given the first two days' play,” he said.

“There are a few tricky pins that you have got to be careful of. I think that is what is great about this golf course, you do have to plot your way around

“I have got a chance to beat my best Open Championship finish.

“Obviously as things stand I am well behind where I want to be with the leaders.

“It is just about trying to finish the best I can now and hopefully same tomorrow, or a bit lower, it would be a great week in the end.”

Richard Bland continued his week to remember as he followed up the honour of taking The 149th Open’s first shot by playing alongside Rory McIlroy on day three.

Bland had a disappointing day, finishing +3, but enjoyed the buzz created by McIlroy’s front nine form.

“I loved it,” he said. “Playing with Rory, the crowd was fantastic. They were cheering us on the whole way.

“The front nine, Rory was lighting it up a bit, so the crowd were really getting behind him. They were getting behind me, and I just could not get anything.

“Apart from the score, I loved every minute of it.”