The second day of The 149th Open has brought rich entertainment, with a host of players playing outstanding golf at Royal St George's.

Collin Morikawa initially hit the front on -9 with a superb round of 64, just a shot shy of the course record, while Argentine Emiliano Grillo reeled off five birdies in his last seven holes to match Morikawa on six-under for the day.

Not everyone made it look so simple, with the early conditions particularly challenging, and as ever the players have been giving their reaction in the mixed zone.

Here are a selection of the best quotes from day two.

RORY: 'CLOSE BUT NOT CLOSE ENOUGH'

Rory McIlroy recovered from consecutive bogeys at the beginning of his round to shoot his second straight round of 70, though he knows he has possibly left himself too much to do over the weekend.

“Two bogeys in the first two holes put me behind the 8-ball a little bit," he said.

“But I played well for a good stretch of holes there, very solid, making three birdies and getting myself under par for the tournament. 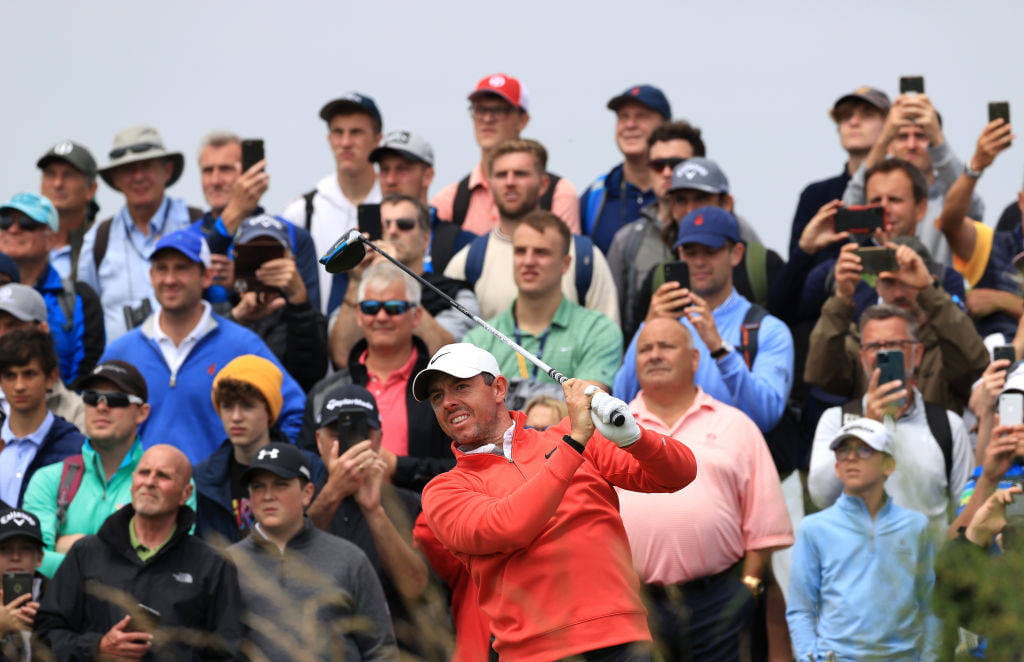 “If I was really on my game and sharp, with how I've played the last two days, I probably could have been 6- or 7-under. But it's close, it's just not close enough.

“I know I need to go out and play really well tomorrow and then I need to pray for a bit of wind in the afternoon and see where that gets me.

“Right now I'm just trying to play my own game and not even look at the board, just try to play a good solid round of golf tomorrow.”

Andy Sullivan is currently the best-placed Englishman as he signed for a 67 for the second time in as many days – and he is not going to guess what a winning score might be.

“You just don't know,” he said. “Some guys shot low scores out there today.

“Whoever is leading might run away with it. You just don't know. That's the beauty of The Open Championship.

“You don't actually know what's going to come out of it and how the guys are going to handle it. 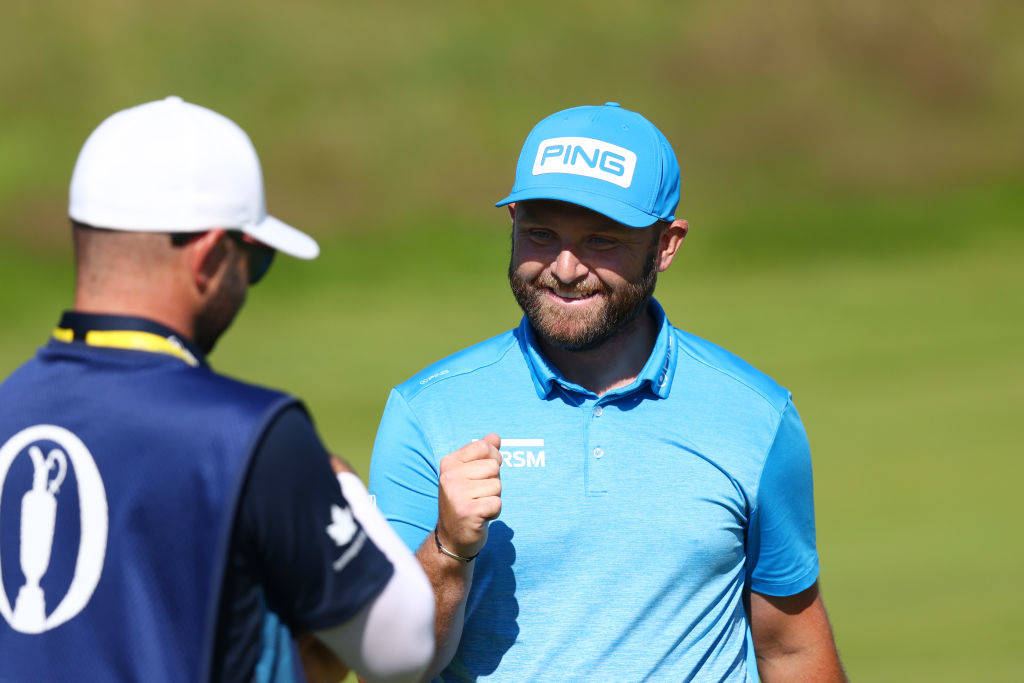 “I'm just going to have to go about my business and hope I'm there come Sunday on the back nine.

“I felt really in control of myself today and it was obviously nice to hole that clutch par putt at the end there on the last hole to really make things sweeter.”

WILLETT IN WITH A SHOUT

Sullivan's compatriot Danny Willett continued his solid week with a round of 69 to leave him -4 going into the weekend.

“A little scrappy in places but some lovely putts on them last four holes,” said the 2016 Masters winner.

“I had a naughty horseshoe and then a couple of lip-outs, but could have been a nice day from not as good a golf as yesterday, but still under par and still somewhere in the hunt.

“By the looks of it, I think unless the wind really gets up, I can see this tournament being one with quite a lot of low scores. I think we're probably going to need a couple of good ones over the weekend.

“This is the first time I've played in front of home crowds for a hell of a long time, and it's amazing.

“To be clapped on to every tee, every green, the ovation you get on the first, down the last, I did really get goosebumps, and that's what The Open is all about.”

SIEM COULD HAVE BIRTHDAY WEEKEND TO REMEMBER

Marcel Siem finished with a flourish, compiling back-to-back birdies on the final two holes to finish on -6 and put himself right in contention.

The German, who turned 41 yesterday, was never going to let birthday celebrations get in the way of his tilt at the Claret Jug.

“I had one glass of red wine with my caddie in the players' lounge when we had dinner, and then I went to bed,” he said.

“There was a lot of text messages. I tried not to reply. Very exhausting.

“I'm very, very happy now after birdieing 17 and 18. My driving was definitely better than yesterday. My iron shots were pretty similar.

“I left out a few chances today, hit good putts but misread them. 17 and 18 were finally great putts [in the] middle of the hole, which was awesome.

“I think my patience was just really, really good today as well.”

HARDING LOOKS TO LEARN FROM PORTRUSH

An eagle at the 14th was the highlight of another good day for Justin Harding, who is one of several players sitting pretty on -6.

“Look, I played pretty good at Portrush through 36 holes two years ago, and I think I let it slip on the back nine on Saturday afternoon,” he said.

“I've learnt from those experiences to just try and keep myself in it for as long as possible, keep doing what we're doing and maybe roll in a couple putts and see what happens come Sunday really.”

VAN THE MAN SETS THE PACE

Daniel van Tonder set an early alarm this morning, with the South African out as part of the second group, but he was one of the few early starters to master conditions on his way to a four-under round of 66, taking him to -6 and a share of second overall.

“Yeah, I’m very happy," he said. "I left a few putts out there, but other than that happy with the performance. I was in trouble a few times, but I managed to muscle it out there a few times and recover from that, so I’m happy.

“I made a birdie on the eighth and from there it just felt a bit easier, me and my wife just agreeing on everything, you know. She trusts my aggressiveness on the course with a few shots, other than that, just enjoyed it.

“66 today – four under par, I was quite happy. Yesterday I felt I left about four shots out. I think today I also left a few out there, but you can’t win it in the first two days, you know. There’s two days to go. So I’m very happy.

“As long as the wind keeps on blowing, I’m very happy about that. I’m here for the weekend and just enjoying every moment.

“I’ve been two days in a row in the bush on the right (off the first tee), but tomorrow it won’t be (smiling)."

Tony Finau followed up a solid level-par round yesterday by shooting 66 to move to -4 and stay in contention ahead of the weekend.

The American is being spurred on by the 32,000 fans present at Royal St George's and said: "I've missed playing The Open, the atmosphere is one of a kind.

"16 and 18 are pretty special, they have a lot of people around those holes with the grandstands and 18 is something we look forward to as players.

"We really enjoy it. I really appreciate the fans' support, I've had a lot of it this week and hopefully it continues over the weekend."

JAZZ DELIGHTED TO MAKE THE CUT

The first birdie of the day was hit by Thailand's Jazz Janewattananond, who is sitting on -1 and will be back for the weekend.

"It's one of the earliest rounds I've ever played in my life, warming up at 5am, but it was pretty good," he said.

"It's great, the first Open cut I've made in my career.

"It takes time, as I grew up in Asia where we don't really see links golf - we don't get this weather, for sure!

"But I played the Duke of York here when I was 14 so it is great to come back here and play The Open.

"When I was 14, I got lost on the fifth hole when it rained and I couldn't get back to the clubhouse!

"Today, the weather was perfect and it is great to have fans back again."

Padraig Harrington put in a much-improved display on day two, with a two-under round of 68 taking him to level par overall.

“Yeah, look, mixed emotions," he said. "I am delighted. It does look like that will make the cut. I would like to be a few shots better.

“I would like to be five, six shots - hey, look, if we're on a wish list, I'd like to be 10 shots better and the lottery numbers. But you know, it is what it is.