As a four-time major winner, Ernie Els has made a career out of hitting clutch shots

But there is one shot in the South African’s back catalogue that springs to mind quicker than any other, especially when it comes to his long association with The Open.

Els had already finished runner-up in his quest for the Claret Jug in 1996 and 2000 before heading into the final round at Muirfield with a two-shot advantage atop the leaderboard in 2002.

And while he eventually had to hold his nerve in a four-way play-off, it was his miraculous bunker shot on the 13th hole in regulation play that will always be remembered the fondest.

He went on to reclaim the Champion Golfer crown a decade later at Royal Lytham & St Annes, but his sand save at The 131st Open surely remains the best shot he has ever hit at the most prestigious major.

Els made his Open debut at Royal Troon in 1989, where he missed the cut, but he credits the major for opening the door to the rest of his career after his performance of tied-fifth in 1992.

Fittingly, it was also at Muirfield where he would put himself on a course that would see him emulate that year’s champion Nick Faldo a decade later by lifting the Claret Jug. “Seeing how much that Claret Jug meant to Faldo, seeing the emotion was quite something to behold,” said Els when reflecting on his showing at The 121st Open.

“If it wasn’t for that Championship, wasn’t for the fact that I finished fifth, which enabled me to get into the next U.S. Open, which I won, which gave me a ten-year exemption.”

After becoming a major winner in 1994 at Oakmont, Els twice finished as the runner-up in The Open, two strokes behind Tom Lehman at Royal Lytham & St Annes in 1996 and eight behind a dominant Tiger Woods at St Andrews in 2000.

While Woods had denied Els in 2000, the American was among those who fell victim to the weather on the Saturday at Muirfield two years later as a storm wreaked havoc.

But as others struggled in the tricky conditions in East Lothian, The Big Easy lived up to his nickname and opened up a two-shot lead over the rest of the field with an impressive 72.

He then appeared to be cruising to the title on the Sunday, but things started falling apart as Els started to battle with his swing in the closing holes. 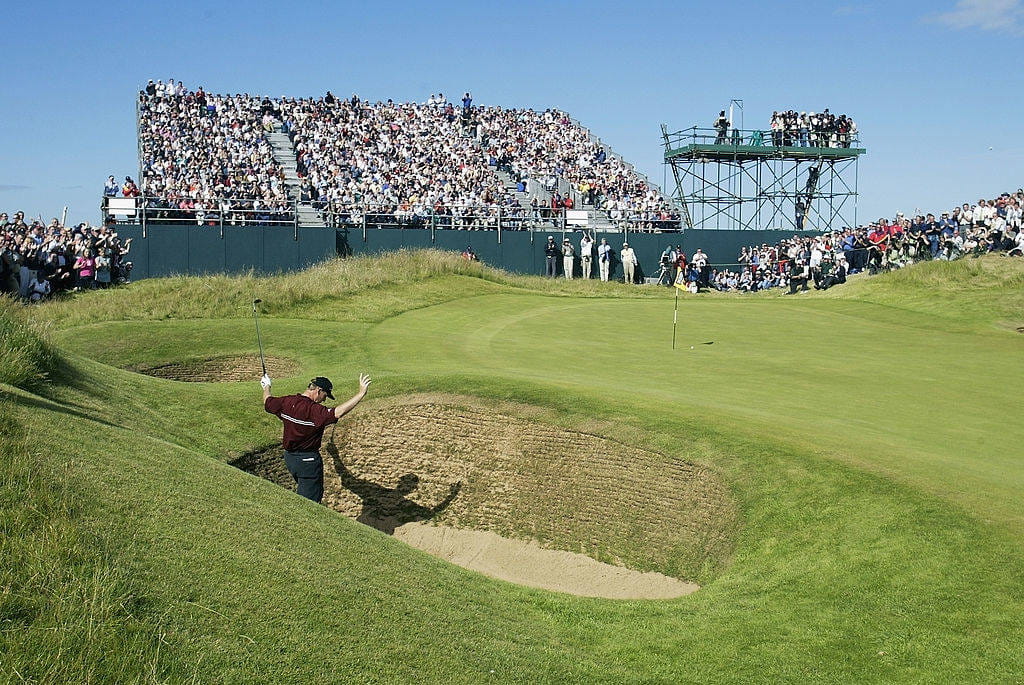 “I kind of like my chances better when it gets a little bit tougher,” he said. “Through 11 or 12 holes I was absolutely in control and then things started changing.”

It was at the 13th where his problem first began to rise to the surface as he found himself in an unenviable position at the bottom of a deep greenside pot bunker.

Best of the Year accolade

Els had pulled his tee shot left of the green at the par three and was faced with a seemingly impossible up and down from the depths of the bunker to make his par.

But with his left foot resting on the riveted wall, and the face of the bunker towering above his tall frame, the gentle giant managed to pop to ball up to within 18 inches.

So good was the shot, which ensured Els escaped with a par despite having hardly any green to work with, it was later voted the “Best of the Year” by the British press.

Els actually produced another remarkable bunker shot that same day in the play-off en route to winning the Claret Jug, having already seen off Steve Elkington and Robert Allenby.

With only Thomas Levet standing in his way, Els got up and down again for a winning par on the 18th – but despite its greater significance, it was the shot on 13th that received all the plaudits.