As long as they play golf at Royal Portrush, it is unlikely anyone will go close to matching Rory McIlroy’s 61.

The jewel in Northern Ireland’s crown, the famous stretch of land situated on Antrim’s north coast has a fearsome reputation as one of the toughest links courses around.

Indeed, in 1951 only two players finished The 80th Open under par, yet in 2005 a 16-year-old emerged and produced a round that reverberated throughout golf in the North of Ireland Championship.

With one eagle and nine birdies, McIlroy, as precocious a sporting talent to come from Northern Ireland since George Best and Alex Higgins, became front page news. He has hardly been off it since.

With four Ryder Cups, a US Open and two US PGA Championships, McIlroy has made good on his extraordinary ability. But his career highlight followed in 2014 as he marched to victory in The 143rdOpen at Royal Liverpool.

This year, he will play for the Claret Jug for an 11th time. But instead of St Andrews, Carnoustie or Royal Birkdale, he will be back at Royal Portrush – where he has done special things before.

McIlroy’s journey to the top was started by his father, Gerry, a keen amateur golfer who worked multiple jobs to help fund his son’s burgeoning talent.

But it was only when McIlroy won a junior tournament in Florida that his game gathered traction and his name began to circulate.

“There was always a feeling in Northern Ireland that we had a very big talent in Holywood but it was only from age 12, 13 or 14 that we really started to hear about him,” said BBC reporter Stephen Watson. 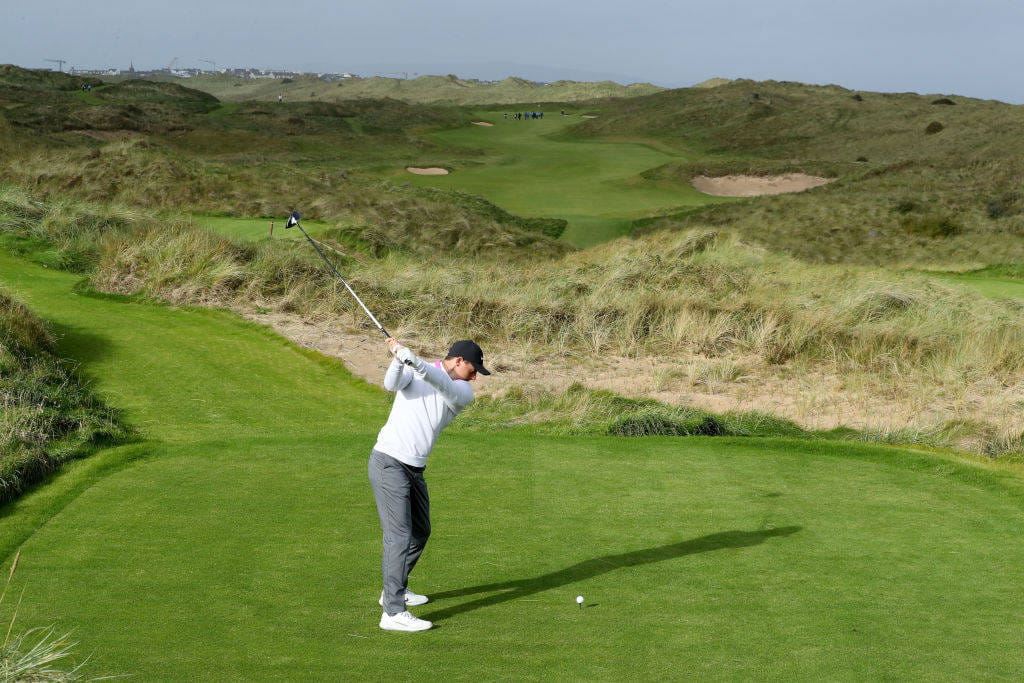 “A lot of kids don’t make it but with Rory we knew he was special. There are stories from when he is 13 or 14, turning up to play with adults and they ask who he is here to caddy for.

“He would say he is playing and then smoke a drive down the first. We always knew, because of the records he was breaking in the amateur game at such a young age, that he was special.

“I remember seeing him for the first time at Holywood Golf Club and I just thought ‘wow’.

That talent continued to be harboured under the coaching and tutelage of Michael Bannon, then the professional at Holywood Golf Club.

A small child, they waited for McIlroy to grow. When he did, he was quickly belting it further than anyone else.

He arrived at Royal Portrush aged 16, having just finished school and with his confidence sky-high as he chased a spot on the Walker Cup team.

“As a 16-year-old, it takes a lot for your confidence to be dented. My confidence is probably more fragile now than it was then.

“I had confidence and cockiness and sometimes I think I need to rediscover that a little bit even now.”

McIlroy’s round built perfectly. He narrowly missed a putt for birdie at the first before sinking one at the second to move to one-under.

Three straight pars followed before further birdies came at the par-three sixth and par-five ninth to see him move to three-under through nine. 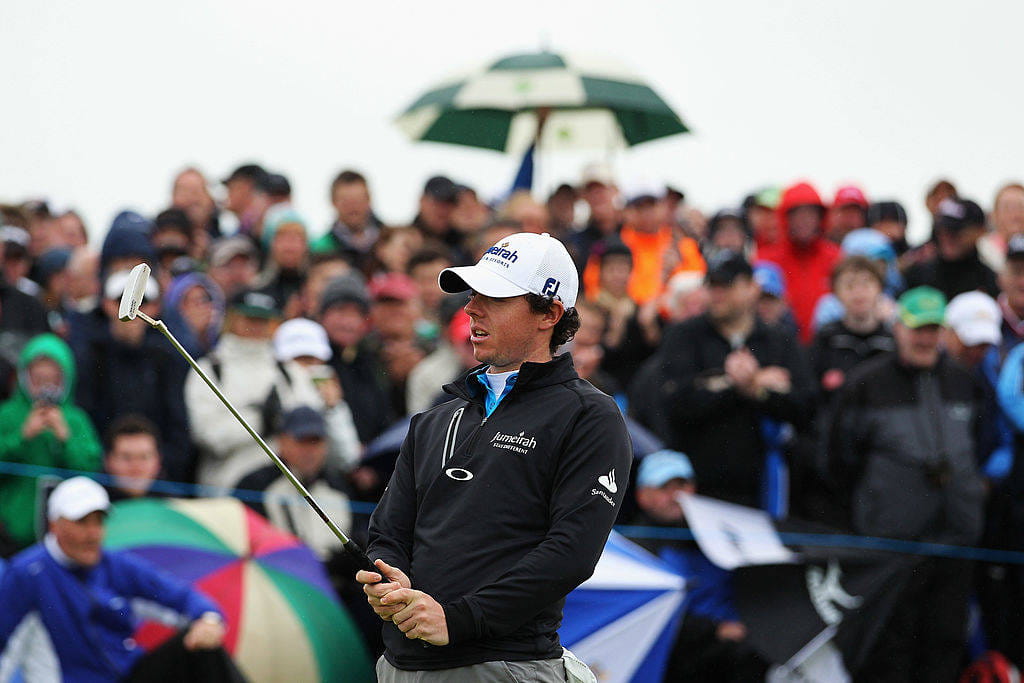 That was special enough but the back nine was something else. An eagle at ten was followed by a birdie at 11 and then five straight birdies to finish – including one at the treacherous par-three ‘Calamity’.

“There are not many golf rounds where I remember every shot but for that round, I do,” McIlroy said.

“I knew the record was 64. Once I got to nine-under through 16, I thought if I could par the remaining two and set the new record that would be pretty special.

“The 17th at the time was a par-five and the easiest birdie on the course. That took me to ten-under and I just thought, don’t screw this up.

“I hit a perfect drive and a good eight iron into the heart of the green. I just wanted to two-putt but ended up rolling it in. I did not care what the score was, I just wanted the course record.”

“I had my dad and a couple of uncles walking round and a mate of mine was on the bag. He had just turned 16 as well!”

‘Darren text to congratulate me’

In front of a moderate crowd, McIlroy’s achievement may not have seemed headline-making news. But quickly, the scale of what he achieved became apparent.

“I was driving home from work and the golf club phoned me but I thought it was a joke. I did not think anyone could shot a 61 around Royal Portrush,” said Bannon – his first coach and mentor.

“On that day, it was set up difficult because it was a qualifying tournament. It lit up the golfing world.” 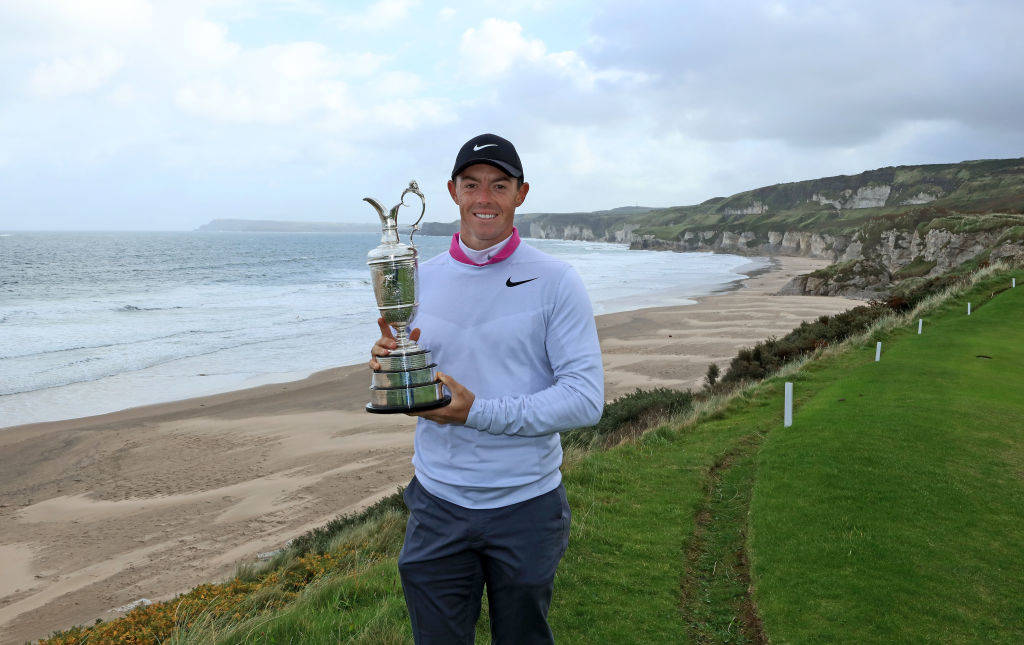 Running parallel to the North of Ireland Championship was The 134th Open at St Andrews. News of what this exciting kid from Northern Ireland had achieved was quickly circulating.

“News started to filter across there that I had done something special and I got a text from Darren Clarke, which was so cool,” McIlroy added.

“It felt normal to me. I had that cockiness and thought this was what I was supposed to do. It is only when time goes on that I realise these things are special and you should savour them.

“It was a defining moment. I became pro in 2007 and had two years to make the Walker Cup. But it was defining because the wider golf world took notice.”

Perhaps only Darren Clarke knows Royal Portrush better than McIlroy. The course is effectively a white blank page to the top players, many of whom have never stepped foot on the first tee box.

Yet, it also looks slightly different. The Dunluce Course has undergone several changes, with the old 17th and 18th holes removed and two new ones built into the middle of the round.

But the prospect of becoming Champion Golfer of the Year on home soil is something he relishes.

“Hopefully the same things happen at Royal Portrush. I hold the record on the old course, but it would be special to come back to The Open and break it on the new one.”