Superfan of The Open

With its unrivalled history and tradition, it’s easy to see why The Open resonates with players and fans alike – possessing a widespread appeal that even transcends the sport.

The 148th Open will see golf’s oldest and most prestigious major return to Northern Ireland for the first time in 68 years as the world’s best golfers vie for glory at Royal Portrush.

And such is the excitement surrounding The Open leaving mainland Great Britain for only the second time, it has inspired artist Nicole Elders to create a unique piece to celebrate the occasion.

Combining her love of The Open with her passion for all things Northern Ireland, the 31-year-old from Nottinghamshire produced her own version of the iconic logo using calligraphy art.

“I’m actually an aeronautical engineer by trade and I first got interested in golf when I was looking at the shape of golf balls and the dimples on them,” she explained.

“I found it really interesting how they work but I’ve really got interested specifically this year with what The Open means, with it going to Northern Ireland for only the second time in its history.

“I got so fascinated by that and I really wanted to celebrate that which is where the piece of artwork came from. I was looking to challenge myself as I do a lot of calligraphy artwork.

“I’ve done a lot of pictures but I wanted to do something really complex around text and I loved The Open logo and the fact that it has The 148th Open at Royal Portrush in there.

“It sort of grew from there as there’s such a story around The Open and it going to Portrush, with it being only the second time ever it’s been held outside of mainland Great Britain.

“I just wanted to celebrate that and challenge myself artistically to tell that story in a piece of artwork – but it took a long time to make and a lot of that was doing research.”

Nicole’s one-off piece celebrates The Open’s long-awaited return to Northern Ireland, where Max Faulkner was crowned Champion Golfer in 1951, by re-creating the logo with lettering.

The work includes a list of Open winners and the history surrounding the Claret Jug, as well as going into detail about Northern Ireland’s golf history, places, people, phrases and slang.

“I've got the history of The Open in there, from the first in 1860 right through to the present day, so every location, every year and every winner, plus all the history around The Open.” artist - nicole elders

“I included the fact that the Claret Jug was commissioned in 1872 and that was only created because the Challenge Belt was won by Tom Morris Jr, who retained it after winning three in a row.

“I’ve tried to pull out these other bits of history that are all worked into the piece, so that makes up the top third of the artwork, but I also wanted to work in some of the Northern Irish slang.

“The piece also includes some of the inventions that have come out of Northern Ireland, the best golfers, the top 25 Northern Irish golf courses, and all these fantastic things I wanted to include.

“It’s really a celebration of, not just The Open, but The Open coming to Royal Portrush this year. I wanted to do something that honoured The Open and this moment in time.” 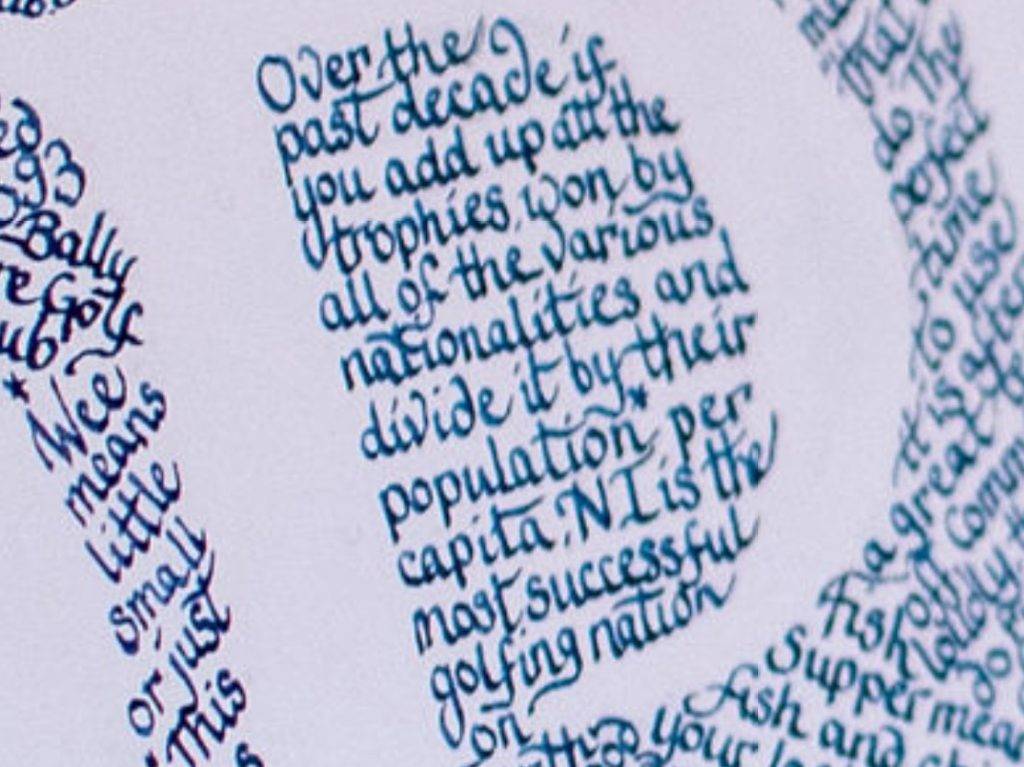 And while Nicole will not be at Royal Portrush to witness more Open history, she admits she will be eagerly watching the action on TV and cheering on the hometown heroes in the field.

“I have so many friends in Northern Ireland who are so excited about what this means. It’s a bit like the Olympics coming to London. It’s a fantastic moment for golf and Northern Ireland,” she said.

The artwork is being auctioned by Nicole during The Open with the inspirational Willie Gregg, who founded Willie’s Orphan Fund to support young children in Northern Ireland and overseas.

Once the artwork is sold, 50 per cent of the final price will go directly to the fund and Nicole hopes her creation will make a significant difference to the charity – as well as one lucky golf fan.

“Willie does so much great work around the world and hopefully, the piece also goes to someone who is really passionate about golf and will give it a great home,” she added.

For more information about the auction for the ‘Portrush Open 2019’ piece, visit www.nicoleelders.com or check out Nicole's Twitter account.